In this post I'll introduce the brand new TeamCity.Virtual plugin that supports execution under virtual environments from Vagrant or Docker

Software is the problem

Every build running under CI requires some software/libraries/JVMs/* to be pre-configured on the machine. When your setup has only one build agent everything is simple. But if you need an easy recreatable environment things get more complicated. Every time you need to install some software on every build agent you have to do lots of routine work. When there is a pool of build machines its getting overcomplicated

There exists at least one way to cope with this complexity. Virtual machines. LinuX Containers. Thanks to Vagrant it became an easy, repeatable and scriptable solution. With LinuX Containers (for example Docker) things are even faster

TeamCity.Virtual plugin makes using Docker and Vagrant in TeamCity as easy as using a build runner. So for example, you may run your nodejs builds in a fresh environment of required version without any extra per-agent pre-configuration work

The build runner is called Docker / Vagrant. On the runner settings page you may specify the virtual environment configuration to start and the script to execute inside it: 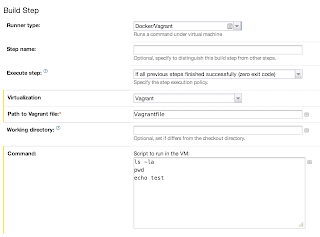 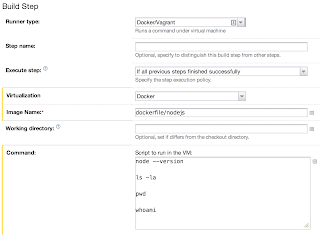 The plugin works as follows:

Vagrant box is specified via Vagrantfile. For Docker you need to specify image name only

This is what you see in the build log of Vagrant VM command:

What is is for

In the next posts I'll cover details on how to use TeamCity.Virtual plugin to run builds with Nodejs, JVM, Android and much more. Remember, all you need to configure for build agents is Docker or Vagrant. Here are links for publicly available images: Vagrant Boxes and Docker Images

Plugin is implemented under Apache 2.0. Sources are on GitHub. Builds are set up and running in TeamCity.